Water hardening methods are divided into two types of resin hardeners and electronic (magnetic) hardeners. Water hardness tends to precipitate. The limestone columns formed in the caves, which are known as slag or slagglite. Or the sediment created inside the kettle is an example of the presence of water hardness and sedimentation. Water hardness precipitates as it forms in the form of calcium carbonate. The same precipitate that if we do not prevent it from occurring before, it may disable a water heater, boiler or boiler. Water hardness causes hardening of the tubes in the pipe wall. This, in addition to increasing the pressure drop along the pathway, reduces the heat transfer coefficient and also increases the surface temperature of the boiler against the burner flame, which in turn causes waste.

Resin hardeners are one of the methods of water hardening, which are made in different capacities as needed. The overall structure of the disintegrators is similar and the difference is only in the type of controls. A cylindrical reservoir made of steel plate welded from inside and out and equipped with at least two openings for access. Inside the tank, a bed of silica has been poured on those resin floors. Both machines have a tube to enter the hard water and a pipe for the soft water outlet with connections and valves, or a multi-way cable. In order to uniformly distribute the inlet water in the upper part, a diffuser is fitted in the toughening device. For the purpose of collecting soft water and uniform distribution of reverse water, a reversible water wash is provided with a steel plate for insertion of nozzles. You can see some examples of these nozzles in the picture below.

The plastic nozzles are mounted on a plate of steel in a hardened cabinet to an appropriate number of at least 3 per square inch of hardening surface. 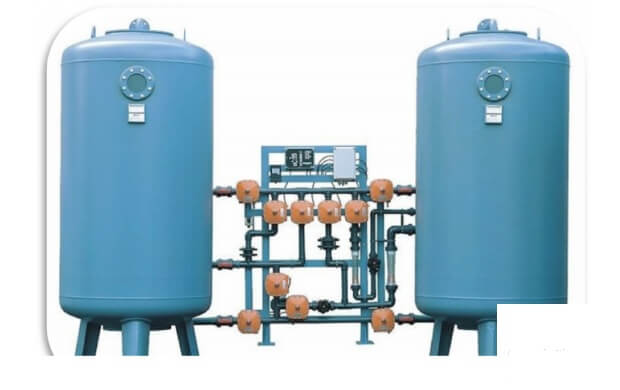 Rinse and revitalize no strainers

Formerly, before the entry of multi-way valves into the market, plumbing washed down the plumbing and a number of bars in the circuit. It may still be found in some of the old machine tools. It’s also worth noting that salt water fits somewhat away from the machine. But water does not have salt, does not foam. If the washing and washing steps are done well and properly. Taking a hard test from the discharge portion will show 0 PPM (zero PPM). Now it’s possible to turn the tightening valves back to its original state and put them back into the circuit. After this step, recycle the salt tank.