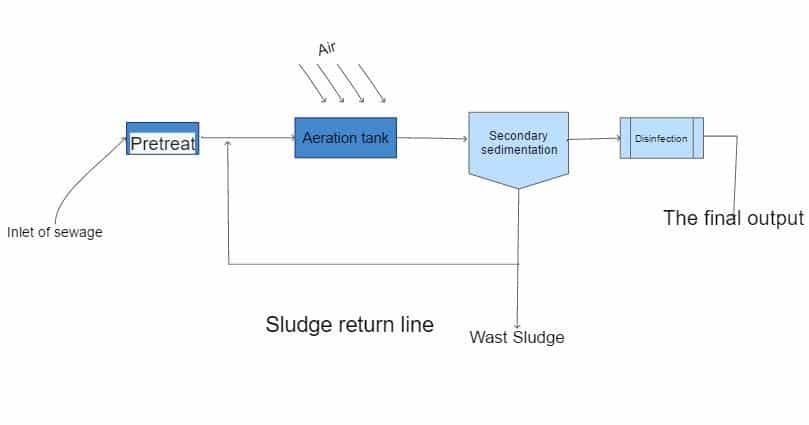 Wastewater Treatment by Extensive Aeration (EAAS) is one of the methods of sanitary wastewater treatment.This method is based on the lowest amount of load in the sewage basin, In this method, the active sludge sewage treatment,at first we get the Garbage from Wastewater , then enters the aeration pond, then the sedimentation process begins, which is part of the sludge returned to the aeration pond,and The effluent is directed from the top of the settling basin towards the chlorine tank. This level of loading causes bacteria to be abundant in more oxygen and in relatively less food, and thus more fully utilize organic matter in the sewage.In this type of filtration system, the concentration of MLSS in the aeration pond is higher than that of conventional activated sludge.

Components of the sewage treatment system in EAAS

The function of the collecting gerbage that is placed in the EAAS method before entering the sewage treatment plant In order to remove floating or immersed solids in the sewage.deleting the materials depended on the size of the fountains and the characteristics of the solids in the sewage system.Typically, metal that use there is made of steel or galvanized ST37 steel.Aeration parts, secondary sedimentation and chlorination, sludge reservoir that are stacked together in a package.The entire body of the Package is Steel ST37 that The floor of package with steel plate ST37 with a thickness of 8 mm and a wall with a thickness of 6 mm.

Aeration system to the sewage worked by Aeration Blowers ,The air produced by the blowers is transmitted through plumbing to the floor of the aeration pond.Then, using diffusers, this air is transferred to the sewage and the biological separation stages of the sewage are discharged and the wastewater compounds are decomposed.

After aeration, the sewage enters the drainage basin to process sedimentation and sludge separation from the treated effluent.

The chlorine injection package consists of a tank of 300 or 200 liters with a mixer that is injected into the wastewater after mixing water and calcium hypochlorite.

In order to control different parts of the sewage treatment package, such as blowers, pumps, chlorine dosing, an automatic switchgear is required to control all parts of the package and all processes are automatically depleted.

Smell of it is very low and in case of good running of the facility, it is completely odorless.The sludge concentration in this method is very low, about 1% and its volume is high.The sewage that is filtered in this way contains a relatively large amount of fertilizer solution that promotes the development of aquatic plants.Therefore, this should be taken into account when importing such refined sewage into water resources on the ground.Often, the resulting sludge can be sent to unit of dryer . In the event of the need for further development of sewage treatment, the AED (Active Auxiliary Sludge) method only made and built up a single sludge digestion and increased the capacity of the refinery.

In this method, it is not necessary to build a sedimentation basin.
It can be used to directly drain the sewage after passing from the garbage collector.Of course, in a hospital, the aeration after the balancing pond is also very good.Selecting a wastewater treatment method with active aeration with aeration in small and medium-sized cities to 100,000 people can be economical.The volumetric flow rate of the wastewater treatment method is very low by the active aerated mass sludge method (EAAS),Because biological masses are long in contact with oxygen and organic wastewater is more widely used in microorganisms.In a wastewater treatment plant (EAAS), the percentage of active sludge is usually returned to the aeration pond.If not carefully used, in addition to the production of untreated sewage, it would be in the correct quality without odor and would be forms of work.